Elon Musk told Twitter employees on Monday that he wanted to add video and voice calling functionality and secure direct messaging to the social media platform. According to his plans, the private messages would be encrypted, meaning the text could in principle only be read by the participants, as is the case on platforms like WhatsApp, Telegram and Signal.

Musk added that he spoke with Signal creator Moxie Marlinspike, a former Twitter employee, who is “potentially willing to help” with encrypting Twitter private messages. “We want to allow users to communicate without worrying about their privacy,” Musk said, citing potential data breaches that could result in messages being leaked, or employees spying on users.

Twitter’s new owner, Elon Musk, has made public his desire to improve how the social network’s direct messages work. In a meeting with employees yesterday, he explained exactly what it looked like.

Framed by presentation slides titled “Twitter 2.0” at Twitter’s San Francisco headquarters on Monday, Musk told employees the company would encrypt private messages and work to add encrypted video and voice calls between accounts, according to a recording of the meeting.

Musk is correct that the private messages have been exposed before. In 2018, Twitter warned that an undisclosed number of private messages between companies and their customers had been accessed by strangers for more than a year. And earlier this year, the US government accused a former employee of improperly accessing user data on behalf of Saudi Arabia, though it’s unclear how the private messages were or weren’t. have not been used.

Sent by Twitter
We recently discovered a bug in our Account Activity API (AAAPI). This API allows registered developers to create tools to better support businesses and their communications with their customers on Twitter. If you’ve interacted on Twitter with an account or company working with a developer who uses the AAAPI to provide their services, this bug may have caused some of those interactions to be unintentionally sent to another registered developer. In some cases, this may have involved certain private messages or protected Tweets, such as a private message with an airline that licensed an AAAPI developer. Similarly, if your company allowed a developer using the AAAPI to access your account, the bug may have impacted the accuracy of your activity data.

It is important to note that, based on our initial analysis, a complex series of technical circumstances that occurred at some point led to this bug and the permanent sharing of account information with the wrong source. 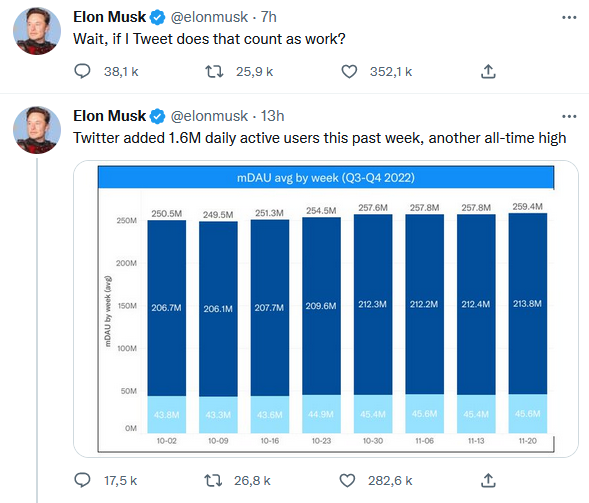 Over the years, Twitter has started and then stopped creating encrypted private messaging on several occasions. But now Musk is determined to roll out encryption as a top priority for the vision he calls Twitter 2.0. “We should get to a situation where I can’t look at anyone’s private messages even though someone has pointed a gun at my head,” he told employees Monday.

He went on to praise Signal, the encrypted chat app that is run as a non-profit organization. He said he spoke with its creator, Moxie Marlinspike, who is now “potentially willing to help” with private message encryption on Twitter.

“Ironically, Moxie Marlinspike was working on Twitter and actually wanted to do encrypted private messages several years ago, [mais] he was denied that and then went and created Signal,” Musk said.

Musk went on to say that “we also want the ability to do voice and video chat via private messages.” He acknowledged that Signal requires sharing a phone number to start a thread and that, through its account system, Twitter can facilitate secure calling “so you don’t have to give someone your phone number.” ‘a “. Signal has said since 2020 that it is also working to stop relying on phone numbers, although it has yet to deploy this capability.

Sent by Signal
At Signal, our goal is to create a reliable, secure and private communications experience that is widely accessible and easy to use. From the beginning, we designed Signal to put your information in your hands, not ours.

Currently, this also means that if your hands accidentally lose your phone in the toilet, your information in Signal is also lost.

It might be more information than you initially think. We believe private communication means more than just encrypted messaging, and we designed Signal with that in mind. Signal provides private groups, private contact discovery, private profiles, and more. All things that are exclusively in your hands. As we support additional features requested by the Signal community – such as addressing that isn’t based on phone numbers and chatting with contacts that aren’t saved in a addresses – this means that more and more of this important carrier data may also be lost.

Other apps and platforms – even if they support some form of encrypted messaging – store this type of data in the clear on their servers, so that when you lose or change your phone, this information is not lost with they. It’s not good for your privacy, so we’ve taken a different approach that doesn’t sacrifice the privacy and security you expect from Signal.

In the latest version of our apps, we are introducing Signal PIN codes. Signal PINs are based on Secure Value Recovery, which we previewed in December, to allow supporting data such as your profile, settings, and people you’ve blocked to be safely recovered in the event of loss or device change. PIN codes will also help facilitate new features such as addressing that is not based exclusively on phone numbers, as the system address book will no longer be a viable means of maintaining your network of contacts.

Signal PINs are at least 4 digits long, but they can also be longer or alphanumeric if you prefer. Because Signal doesn’t have access to your keys – or your data – your PIN isn’t recoverable if you forget it, so our apps help you remember your PIN with periodic reminders. Don’t worry, these reminders become less frequent over time.

We’re excited to put Signal PINs in your hands, as we believe this technology will help us provide a number of new, useful, and improved features while maintaining strong privacy and security.

It’s unclear whether calling and encrypted messaging would be available to all users, or only as part of the $8-a-month Twitter Blue subscription.

The planned features could also tie into Musk’s idea of ​​”creating X, the catch-all app.” The world’s richest person bought the X.com domain name more than five years ago and talked about creating a “super-app” comparable to WeChat in China.

What do you think of the direction taken by Elon Musk on the future of Twitter?

Encrypted private messaging, video and voice calls, features likely to interest you on this platform? Why ?

Could such features be reserved as part of the $8 per month Twitter Blue subscription to entice users to put their hands in the wallet? Why ?

Manage Cookie Consent
To provide the best experiences, we use technologies like cookies to store and/or access device information. Consenting to these technologies will allow us to process data such as browsing behavior or unique IDs on this site. Not consenting or withdrawing consent, may adversely affect certain features and functions.
Manage options Manage services Manage vendors Read more about these purposes
View preferences
{title} {title} {title}